Two more additions to our family

Posted on November 20, 2012 by HolidayIncTheShow

We are proud to welcome two more talented actors to the Holiday Inc. cast!

Kristina always knew rollerblading skills would come in handy some day! She originally hails from Kingston, Massachusetts….. and wishes she could borrow some of their snow for the holiday season! She is very excited to join the cast of “Holiday, Inc.” She has performed around the world as a lead production vocalist with Princess Cruises and Celebrity Cruises, as well as locally in shows such as “Totally Electric”, “Reefer Madness”, “New York Nights”, “Smokey Joe’s Cafe,” “Footloose,” etc. You may also have seen her singing and dancing at Busch Gardens. USF: Music Performance. Gratitude to Jonny for giving me a chance and believing in me ever since, Mark Lubas and Dr. David Isele for the vocal coach excellence, and love to my family for all of the support. Special thank you to Dorene and ESP for this wonderful opportunity! To R and J: Puddlesaurus says thank you for all the love and friendship. Take care of the Arch-Bushop!

Kaleb is a sophomore Performing Arts major at The University of Tampa. He was
last seen in such productions as Biloxi Blues (Donald Carney), The Mystery of
Edwin Drood (Ensemble), and A Grand Night For Singing (Marvin). He would like
to thank his family for their love and support and a special thanks to Jonathan
Van Dyke for giving him the opportunity to be a part of such a wonderful show!

So excited to have these two aboard! We begin rehearsals today and are eager to get going.

See you all at the Straz!

Posted on October 31, 2012 by HolidayIncTheShow

Sammy Aubin will be joining us this season as Ivy. This is her first theatrical production, but she has spent years onstage as a member of the talented Tampa ensemble Entertainment Revue. So happy to have her aboard!

Posted on October 29, 2012 by HolidayIncTheShow

We are thrilled to welcome a new member to the Holiday Inc. family!

Coya Bailey Jones will be joining us this year in the role of Angel Divine. Her bio:

Singing since she was eight years old in church has landed Coya in several hit musicals such as “The Life” as Queenie, “Smokey Joes Cafe” as Bj, and  the beloved musical”Katonga” as Shade. Music has taken Coya all around the country doing what god has blessed her to do in several shows, musicals, bands and solo performances. Every time she performs she feels honored to share her love and passion for music and theatre with everyone.

Come see Coya and the entire cast at the Straz Center for the Performing Arts’ Jaeb Theater this December 13-22! Tickets will go on sale soon. We will post here, as well as on our Facebook and Twitter pages, as soon as ticketing is live.

The Search For Ivy is On!

Posted on October 10, 2012 by HolidayIncTheShow

Want to be a part of Holiday Inc? Keep reading!

ESP Theatricals is currently seeking non-Equity replacements for the 2012 performance run of Holiday Inc., which will be returning to the David A. Straz, Jr. Center for the Performing Arts this December.  Written by Bay Area native Jonathan Van Dyke, Holiday Inc. tells the story of Ivy, a young elf who has become disenchanted with the holiday season. Together with the Holiday Inc. Board of Directors, Ivy rediscovers the spirit of the season. The show is filled with high-energy musical numbers which encompass Broadway, disco, swing, R&B and pop.

Rehearsals begin in late October, 2012, during evenings and weekends. Production opens December 13, 2012 at the Straz Center’s Jaeb Theater, and will end no later than December 23. Applicants must also be available during the day on November 9 for a promotional appearance, with the possibility of additional promo events TBA. A full production schedule will be presented at the audition.

IVY (Principal Character): Female. Strong young actress who sings very well. Movement/dance ability a plus. Must appear to be between the ages of 8-12 and no taller than 5’. Ivy is precocious, curious, a bit sarcastic, yet endearing. Should have “regular kid” qualities with solid performance skills.

Please prepare one song of your choice (32 bars) with CD/iPod music track that shows vocal range, and a 30-second monologue. Come dressed comfortably with attire and shoes appropriate for movement or dance.  Please bring a photo and resume (if available), stapled back-to-back. All minors must be accompanied by a parent or legal guardian.

If you would like more information, email Meredith at meredith@esptampa.com

Posted on October 10, 2012 by HolidayIncTheShow

Holiday Inc. is pleased to announce our 2012 schedule!

See you all soon!

Posted on December 11, 2011 by HolidayIncTheShow

Some pics from this morning’s rehearsal with our carolers for the opening number: 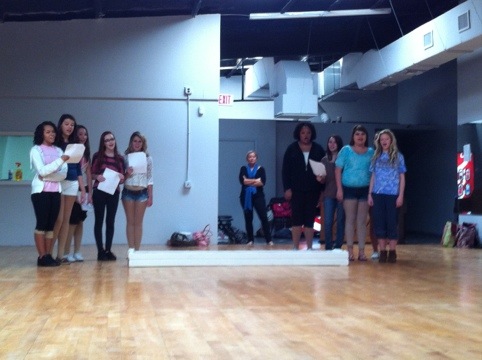 Posted on December 10, 2011 by HolidayIncTheShow

Some great pics from the last few weeks. 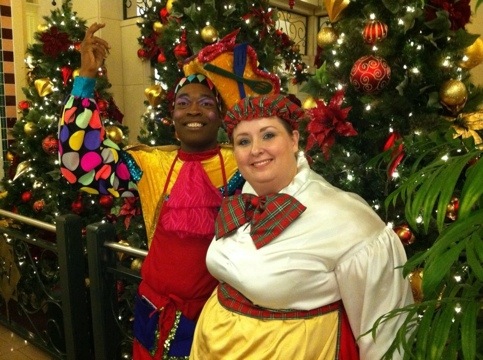 Rehearsals at the Jaeb: 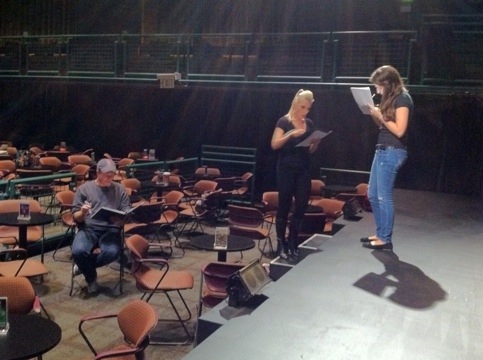 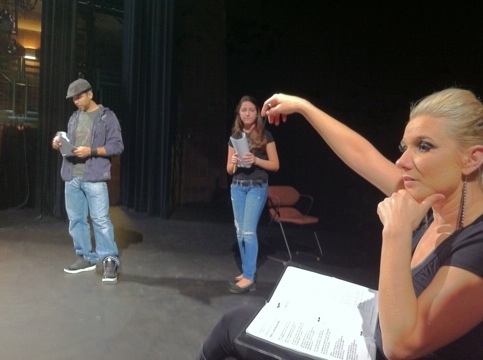 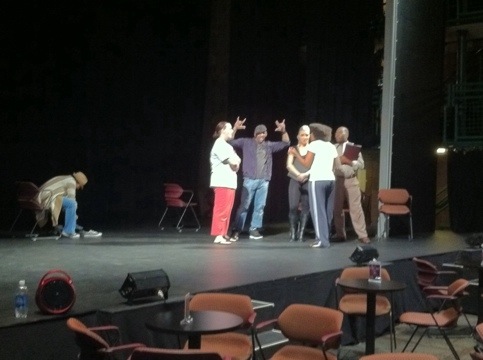 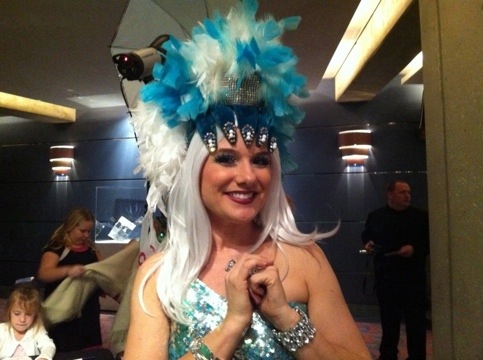 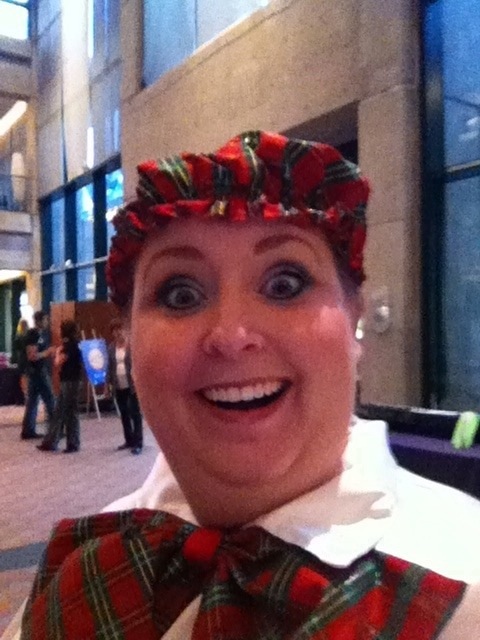 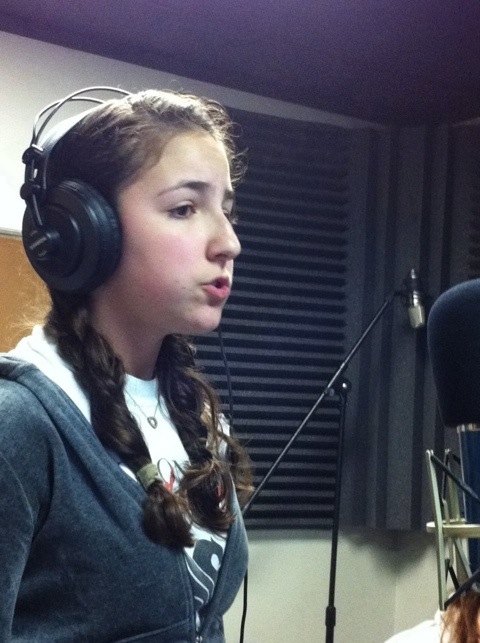 With our friends from the Straz Center

We have many more to bring you from our last week of rehearsals as preparations continue for next week’s opening night!

Posted on December 6, 2011 by HolidayIncTheShow

Just a quick note to say sorry for the lack of updates on the blog recently. Our staff is quite small and we have been busy covering rehearsals and promotional events in addition to the regular marketing. We will have a comprehensive update very soon. Thank you all for your patience!

Posted on November 12, 2011 by HolidayIncTheShow

This week, our “Meet the Team” series continues with our musical director and the actor behind Hearth Tannenbaum, Meredith McDermott.

Meredith has been performing, either as an actor or musician, since she was a child. Her primary musical training is as a percussionist, and she has spent many years performing with bands and orchestras and, for a time, in drum corps. She has always had a passion for acting, and as a freshman in college she began pursuing musical theatre alongside her studies as a television production and percussion performance student at the University of South Florida. Some of her stage credits include Ragtime, The Prince and the Pauper, Broadway Gone MAD, Once Upon A Mattress, and White Hot Broadway.

In 2007, while working on the board for a local theatre group, Meredith became reacquainted with Jonathan Van Dyke, whom she had briefly performed with in a local production. It was at that time that she was cast in his ’80s musical, Totally Electric, playing the role of the eccentric show choir singer Grapenut Brown. She has been working on the show ever since and has either appeared in, or musical directed, six different productions of the musical to date. Overall, Holiday Inc. marks their eleventh theatrical collaboration.

On creating the role of Hearth Tannenbaum, Meredith likes to say she’s “a little Mrs. Potts, a little Mrs. Doubtfire, and a little of myself.” She feels extremely privileged to have worked on this production, especially with such a bright future ahead of it, and with so many talented friends and colleagues in the cast and creative team.

Meredith is also an accomplished director and musical director. In addition to Holiday Inc, some of her credits include the aforementioned Totally Electric, as well as Van Dyke’s horror-movie spoof The Class of RIP, The Wiz, Taboo, Miss Polly’s Institute…Puts On A Show!, Dinner With the MacGuffins and Boy Meets Girl.

In addition to her stage work, she also works as a private vocal and acting coach and as a theatre arts teacher in Tampa, FL. She also does work in marketing and public relations and web/graphic design for theatrical groups.

Meredith would like to thank Jonathan for his continued support and friendship; Dorene Collier and the ESP Theatricals team for all their hard work; her family and friends Simo and Marlee; and her students.

Be sure to check back next week for another installment in our blog series. Also, we will be posting content from our latest promotional events and rehearsals. Don’t forget to subscribe, so you don’t miss a thing!

Posted in About Us | Tagged Hearth Tannenbaum, Meredith McDermott | 1 Comment

Posted on November 5, 2011 by HolidayIncTheShow

Welcome to the first installment in our blog series, “Meet the Team”. In this series, you will get the opportunity to meet the people behind Holiday Inc.-the cast, creative team, and crew who have spent so many hours bringing our show to life.

This week, we bring you Jonathan Van Dyke, writer and director of Holiday Inc and the actor behind Elfton John, the workshop’s “head elf.”

Jonathan is a graduate of the American Musical and Dramatic Academy in New York City. He got his start in the entertainment business at Walt Disney World, playing “fur” characters in parades and shows, a “dancing scarecrow” and more. He has acted in over 50 theatrical productions over the years, traveling to all 50 states in the process! Some of his favorite regional and touring roles include: Albert in the national tour of Bye Bye Birdie, Jamie in The Last Five Years, Jerry in The Full Monty, Billy Earle in No No Nanette, Phil Davis in White Christmas, and Harold Hill in The Music Man. He also appeared with Bob Keeshan (Captain Kangaroo) in The Wizard of Oz and toured in Oh, Calcutta! with Gennifer Flowers. He has also starred in the films Prime Of Your Life and The Glass Window.

In 2000, Jonathan embarked on the second phase of his entertainment career when he began writing his debut musical, Totally Electric. Set in the 1980s, the show is loosely based on his experiences at East Lake High School in Tarpon Springs, FL. With a soundtrack filled with ’80s pop favorites and an endearing cast of characters, Totally Electric follows a misfit choral group, the Syncopated Sensations, as they struggle to be recognized among their peers in the last days of high school. The show premiered at the Duplex in Greenwich Village in 2007 and played to sold-out audiences during its run. He was then asked to re-mount the show in Tampa several months later, and Totally Electric became the first show to open in Ybor City’s Ritz Theater after its renovation. Again playing to sold-out crowds during its Tampa run in summer 2007, the show then had subsequent runs in New Orleans, Louisiana; Sarasota and Riverview, FL; and Denver, Colorado, and an encore cabaret performance in New York.

Dorene Collier, president and founder of Event Show Productions, approached Jonathan in 2009 about penning a new kind of holiday musical. Thus, Holiday Inc. was born. Taking his inspiration from both classic musicals and popular music, he created the show with a broad audience in mind, while maintaining the humor and poignancy that became his trademark in Totally Electric.

Jonathan has also written numerous scripts for events and galas, as well as two other full-length productions: The Class of RIP: The Final Prom, a tribute to 1950s and 1960s-era B- horror movies and girl-group music that premiered in Tampa in 2009; and Spring at the Willowbrook Inn, a dramatic play which will have its premiere in Fort Lauderdale, Florida this winter. Jonathan has been a member of the Dramatists Guild since 2008.

In addition to his own creative work, Jonathan has directed youth productions of Seussical, The Wiz, and West Side Story, and has taught master classes in acting and musical theatre from Tampa to New Orleans. He is currently directing I Love a Piano for Broward Stage Door Theater, and is the Associate Director of Boeing-Boeing at the Straz Center next spring.

Jonathan wishes to thank Dorene for this amazing opportunity, as well as his cast and creative team, his family, and friends for their support.

Each week we will be bringing you a new installment in this series. Be sure to subscribe to our feed!